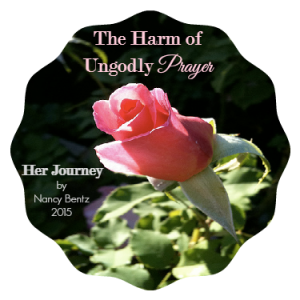 Healing prayer and the prophetic have been part of my life since I was a child. Growing up as no stranger to the laying on of hands, it was not something that I shied away from. I’d had no reason to mistrust the spirit of ones who ministered to me in such fashion.

The results of healing, comforting and Holy Spirit-inspired prayer have been real and substantive. My life has been encouraged and emboldened because there were ones who prayed for me up close and personal. I know there is power in prayer.

Standing in stark contrast, though, to my trusting faith as a child, a teen and a young woman is knowing the darkness of ungodly prayer and hands I wish had never been laid on me. Three instances remain livid, I mean…vivid in my memory.

But yes, I do mean livid too. Livid at the Enemy, who tipped his ungodly hand in each incident.

The first emblazoned memory was at the local church my husband and I were attending. We were now in our forties and more acquainted with spiritual abuse than we cared to be. Our first visit to this church was like a cup of cool water to our weary and beaten up souls. We returned and stayed – for ten years.

Early on, the altar beckoned to me, to my husband. Body ministry was commonly practiced in this place. The presence of the Lord fell thick at times. It was in such an atmosphere that I found myself standing at the altar oblivious to anyone around me, lost in the tender love of the Lord. I felt like the rose looks in the above photo; a young bud coming back to life in the healing sunshine of His love. It was palpable.

Basking with arms upraised drinking Him in, next thing I knew a bucket of icy cold water was dumped on me from head to toe. Not literally, but in spirit the same effect. What had been transpiring between Holy Spirit and me was shut down by chilling cold, instantly dissipating the warmth flooding me.

A woman of the congregation, eager to minister while bound in many unhealthy and ungodly ways, had come up next to me. Laying hands on me she began to pray in a loud and forceful voice, “More! Give her more, Lord! More. More. More!!” When the first “More!” left her mouth, the icy bucket was dumped.

I returned to my seat in that chilled state, a far cry from the flow of the very real warmth invading me. After service I told my husband what had happened. He shared in reply that while he was being prayed for separately from me, the woman praying for him drew their attention to me with, “Something’s happening there and it’s not good.” They came over (rescuing me), but the damage had been done.

The rosebud was frozen. The new season just beginning returned to the ice age.

I wish that was the only instance I had to relate, but two more followed.

***
As part of our own healing journey, my husband and I participated in the program offered by an unnamed healing ministry at some point in those ten years. It was not related to the church in any way but served as a para-church organization.

We would travel to another part of town for the weekly evening classes, breakout groups included.

One facet of the breakout sessions was that spouses were placed in different groups for ministry time. What was to have been a ‘small group’ had mushroomed to about 14 people. I felt it was too many to provide a safe environment for the level of intimate discussion being invited. I was not comfortable.

This particular evening, a question posed to the group resulted in several individuals receiving prayer. The married couple facilitating the group invited another married couple they knew to join them in praying for ones seated in the large circle. Nothing seemed too amiss. Until the invited couple reached me. Kneeling down before me, the wife laid her hands on my knees and began to pray. She then asked me a question causing me to look at her. My answer did not appease her.

She began to forcefully speak to me, her eyes glittering. As real as the effect of a bucket of ice water being dumped, I sensed I was staring at the eyes of a serpent. No problem in identifying who it was.

But it didn’t stop there. The hour was getting late and it was time to go home. The group broke up with the others taking their leave. All but the two couples and me, during which I was subjected to relentless digging for more. After an extended period of time my husband, long released from his group, began to wonder why I was so delayed in appearing. He finally went to the male program director and together they entered the room my breakout group was using.

Upon seeing only me and the ‘prayer partners’ remaining in the room, they incredulously (and rightly so) asked what was going on! I was never so glad to see them, for as much as I tried to tell these ones I was finished and wanted to go home, they would not take no for an answer. I think it not too strong to say it felt like spiritual rape taking place. My ‘No’ meant nothing. It just went on and on with icy glittering eyes.

When I shared privately with the two men what had taken place, the program director was mortified at the treatment I had endured under the guise of ministry in the name of Christ and the organization. We later learned that he left the organization not too long after, disenchanted with things going on within.

***
The third incident occurred in the first year of my husband’s counseling practice ten years ago. Again, it was a woman. In this case she asked permission to pray for me. I should have listened to my gut feeling of discomfort (given the previous two instances) but instead, in an effort to not offend her since she was an acquaintance of my spouse, I agreed. The effects of being slimed lasted a long time.

We have come a long way since then. We are no strangers to healing prayer, the prophetic and the laying on of hands. But have we learned!

The result of these incidents and others is that the Lord has taken what the Enemy meant for evil and used it for our good. His instruction and wisdom in godly protocols when ministering to others is priceless. At the least, we ask permission to pray for or lay hands on someone. We take no offense if they decline or refuse. Honoring their person and choice is vital.

The Body of Christ desperately needs healing. I pray that those who have been wounded and spiritually abused by others bearing the name of Christ would come to know there is power in prayer. Godly, redemptive prayer.

2 comments for “The Harm of Ungodly Prayer”