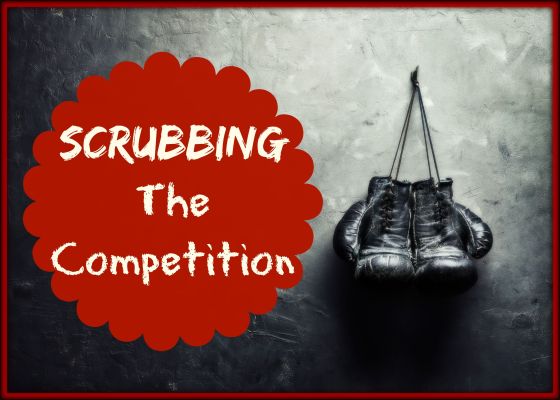 Tiffany teaches (and is taught) Spiritual Formation in an M.A. program offered for Christian leaders throughout Africa and Asia. In her various writing projects, Tiffany prefers grappling with the Scriptures in the context of messy life struggles to tidy, simplistic answers. Her current office is her kitchen in St. Andrews, Scotland, which is also her classroom for her three children, her counseling office for university students, and on rainy days, her laundry drying space.   Tiffany blogs at Messy Theology. Why not head on over and say hello!

I’d like to think that I am not competitive, that I have learned to love others to the point that I can pursue my own personal excellence while rejoicing when they achieve the same. But then I run smack into the glass door of reality. The truth is that I sometimes look around a room and find fault with each person present. I struggle to celebrate when my peers get recognized or promoted beyond me. And I find ways to justify in my own mind why I am more deserving than they.

At the heart of all this I recognize a deep selfishness which hinders true community. As long as my self-interests are not threatened, I am free to love, to affirm, and to promote those around me. But as soon as their success impedes my agenda, the warm fuzzies evaporate and my green-eyed monster is laid bare.

Despite my life-long efforts to fight this tendency, I was recently ashamed to discover it still at work in me. O wretched friend that I am—who will save me from my critical, competitive self?

All of a sudden the disciples incessant bickering about which of them was the greatest doesn’t seem so ridiculous to me. They were merely saying out loud what I valiantly try to mask. At least they weren’t hypocritical about it!

But our jostling for position must put a dagger through Jesus’ heart. After all, isn’t the kingdom all about Him? There He sat at the table the night before He died, grieving over His impending suffering, savoring His farewell dinner with His friends, and predicting one’s betrayal, and all they could talk about was which of them was most important.

The answer was staring them in the face. God was sitting there in the flesh, the Creator of the Universe passed them the bread. But rather than exert His position as Potentate of Time or rebuke them for their petty arguing, Jesus simply got up from the table and silently made His point.

Jesus knew that the Father had put all things under his power, and that he had come from God and was returning to God; so he got up from the meal, took off his outer clothing, and wrapped a towel around his waist. John 13:3-4

He knew who He was. As painful as it was to be perpetually undercut by His leaders, misunderstood by His family, questioned by the masses, and even doubted by His friends, Jesus’ identity was firmly rooted in who the Father said He was. He didn’t have to put His disciples down to establish His worth. Because He was secure in His own position, Jesus could voluntarily lower Himself to elevate others.

After that, he poured water into a basin and began to wash his disciples’ feet, drying them with the towel that was wrapped around him. John 13:5

And that is exactly what He did. Jesus made His way around the table of squabbling subordinates, kneeling before each one and serving him in the most menial way possible. The hands that flung stars into space scraped the scum from between their toes. The back that would soon bear the weight of the world bent in bared effort before His uppity inferiors.

Jesus answered, “A person who has had a bath needs only to wash his feet; his whole body is clean. And you are clean, though not every one of you.” For he knew who was going to betray him…John 13:10-11

Not even His betrayer was excluded from Jesus’ tender service that night. Who could fault Him for refusing to stretch out His neck before the man who had already sold Him to His murderers? But Jesus showed the full extent of His love by washing the feet of both His competing friends and His conniving enemy.

When he had finished washing their feet, he put on his clothes and returned to his place. “Do you understand what I have done for you?” he asked them. “You call me ‘Teacher’ and ‘Lord,’ and rightly so, for that is what I am. Now that I, your Lord and Teacher, have washed your feet, you also should wash one another’s feet. John 13:12-14

Having made His point with His hands, Jesus reinforced it with His words. Yes, He was rightfully their superior, and it was important that they all remember that. But His exalted position was merely a platform from which He chose to raise up those around Him. If His disciples wanted to honor Him, they would have to do so by imitating His example of honoring each other.

I have set you an example that you should do as I have done for you. I tell you the truth, no servant is greater than his master, nor is a messenger greater than the one who sent him. John 13:15-16

And this is where Jesus’ words lodge with me. There is nothing wrong with desiring greatness. But I am going about it all the wrong way if I seek to promote myself at other’s expense. There is no room for that sort of competition in God’s Kingdom. If coming out first involves putting others down (even in my own mind), then I have effectively made myself last.

My command is this: Love each other as I have loved you. Greater love has no one than this, that he lay down his life for his friends. John 15:12-13

The road towards greatness in His kingdom is paved through the laying down of my own self. My pursuit of excellence in His eyes should lead me to wash my competitor’s feet, not trounce them under mine. Jesus calls me to pursue the enhancement of the whole Body, of which my fellow disciples are an integral part.

After all, I am not the Bride of Christ.

*This post has also been published at the Bread for the Bride blogsite.

4 comments for “Scrubbing The Competition”