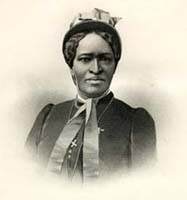 Amanda Berry Smith was born into a poor slave family in Maryland, USA, in 1837. Her father and mother were Bible believing Christians and Amanda later referred to the prayers of her maternal grandmother as being instrumental in her salvation.

Samuel Berry, Amanda’s father, laboured long hours as a slave by day and worked in a neighbouring field by night to earn enough to buy the family’s freedom. By 1850, having secured freedom for himself, his wife and his children, Samuel moved the family to Pennsylvania, where for many years their home was part of the famous Underground Railroad route for runaway slaves seeking liberty in Canada.

Amanda had no more than a few years formal education during her childhood and was mainly home taught. At thirteen years, she became a household servant, working for various white employers in domestic service. Though Amanda had been brought up in a home where Bible reading, prayer and church attendance were frequent, she had yet to commit her own life to Christ. At seventeen she married but was disappointed to find her new husband had a serious problem with alcohol. She soon realised her hasty marriage had been a mistake.

Enlisting in the Civil War, her husband Calvin went missing presumed dead, leaving Amanda a young widow with two small children; (one child soon died.) In 1855 Amanda became very ill and was not expected to survive. Near death, she had a vision of herself preaching to a great crowd Jesus’ words from John 12:32: ‘And I if I be lifted up I will draw all men unto me.’ On waking from the vision her health began to return and she determined to seek God for the way to salvation. She later wrote: ‘I thought God had spared me for a purpose, so I meant to be converted.’

In March, 1856, Amanda ceased struggling with God and received faith to believe. In her own words:

‘O, what a conflict. How the darkness seemed to gather around me, and in my desperation I looked up and said, “O, Lord, I have come down here to die, and I must have salvation this afternoon or death. If you send me to hell I will go, but convert my soul. …Then somehow I seemed to get to the end of everything. I did not know what else to say or do. Then in my desperation I looked up and said, “O, Lord, if Thou wilt help me I will believe Thee,” and in the act of telling God I would, I did. O, the peace and joy that flooded my soul! The burden rolled away; I felt it when it left me, and a flood of light and joy swept through my soul such as I had never known before. I said, “Why, Lord, I do believe this is just what I have been asking for,” and down came another flood of light and peace.’

By 1864 Amanda had moved to Philadelphia. She agreed to marry James Smith, a deacon in the African Methodist Episcopal Church (A.M.E.) on the understanding that he would become ordained and together they would serve God. Smith reneged on the promise and later admitted he had deceived her and never intended to enter ministry. The marriage was a very unhappy one.

Amanda worked long hours taking in laundry and undertaking other domestic chores, as well as giving birth to three children, none of whom lived to adulthood. Her prospects of following her calling seemed further away than ever, yet she hungered deeply to obey God and committed her future to Him, despite her husband’s growing opposition.

When James died in 1869 Amanda decided to trust God with the future for herself and her one remaining child, a daughter named Maizie, and moved into full time ministry. Though filled with fear and trepidation about how she would be received, she began accepting invitations to preach and sing at various camp meetings and revival meetings. Amanda had always been a gifted singer and this, along with her powerful preaching, soon opened ministry doors for her.

From time to time she would encounter resistance on the grounds of gender or race, but still she continued to receive invitations to address both racially mixed and all white audiences. While denied ordination or leadership opportunities within her own denomination, Amanda became the only black and the only woman member/leader of the National Camp Meeting Association.

In 1878 Amanda accepted an opportunity to expand her ministry to England, Scotland and Ireland and after spending a year in the United Kingdom and Europe travelled on to India at the invitation of the Methodist Episcopal Bishop of India, who had heard her speak in the United States. He stated enthusiastically: “I have never known anyone who could draw and hold so large an audience as Mrs. Smith.”

Amanda also ministered in Burma (now Myanmar) and while there visited the grave of Anne Judson (who we have previously featured on Ishshah’s Story). She wrote: ‘We make our last visit to the grave of Mrs. Judson, hear the story of her life, and I breathe a prayer to the Father for His Spirit more fully in my own heart, as these words come to me: “Let me die the death of the righteous, and let my last end be like hers.’

In 1882 Amanda moved to Liberia in West Africa, serving alongside Baptists, Congregationalists and Presbyterian missionaries as they worked among local tribes.   While there she started a Christian school for boys. Throughout these years her own denomination, the AME, continued to withhold ordination or financial support for women, and Amanda never pressed the issue.

After twelve years away, aged in her early fifties and with failing health, Amanda returned to the United States in 1890. She began making plans to open a home for black orphans which was eventually funded through her own savings and supporters’ donations. The Amanda Smith Industrial School for Girls opened in Harvey, Illinois, in 1899 and operated until it was destroyed by fire in 1918.

Exhausted and in poor health, Amanda Berry Smith retired to Florida in 1912 where she lived out her final years in a home donated by a supporter. She died on February 24, 1915, aged 78. She is remembered not only for her dedication to Christ, but as a formidable evangelist, missionary and reformer who functioned successfully in Christian ministry despite the absence of male ‘covering’ during a time when women in ministry were widely treated with suspicion and contempt.

May the Lord grant to His church many more women with the courage, anointing and humility of Amanda Berry Smith!

An Autobiography The Story of the Lord’s Dealings with Mrs. Amanda Smith the Colored Evangelist; Containing an Account of Her Life Work of Faith, and Her Travels in America, England, Ireland, Scotland, India, and Africa, as an Independent Missionary Smith, Amanda iii-xvi, 17-506 Chicago: Meyer & Brother, Publishers,108 Washington Street,1893