Celebrating ‘The Trio’ – Mildred, Eva and Francesca – Of China 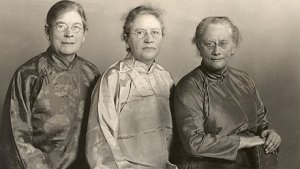 “From Etzingol to Turpan, from Spring of Wine to Chuguchak, we … spent long years in following trade-routes, tracing faint caravan tracks, searching out innumerable by-paths and exploring the most hidden oases. … Five times we traversed the whole length of the desert, and in the process we had become part of its life.”  Mildred Cable*

Mildred Cable was born in 1878 in Guildford, England, the daughter of a wealthy draper. An adventurous child, her family tried hard to suppress her ‘free spirit’, preferring that she apply herself to academic studies. She gave her life to Christ in her teen years and before long, after hearing a visiting missionary from China, announced her intention to become a missionary with the China Inland Mission.

Mildred went on to study pharmacy and human sciences at London University and became engaged to a young man who also intended to serve as a missionary to China. However, when news of the Boxer Rebellion reached England, in which thousands of foreigners were murdered, (including 58 adults and 20 children from the China Inland Mission), her fiancé changed his mind. The young man announced he would marry Mildred only if she renounced her plans to become a missionary. At this Mildred was brokenhearted and, missing her final exam, took herself into isolation for a short period to seek God’s will. In 1901 she sailed for China.

Evangeline (Eva) and Francesca French were born into an Anglo-French family and were educated in Geneva, Switzerland, later moving to England. Evangeline was a rebellious child, described by some as ‘outrageous’. Her family were therefore stunned when she became a Christian and not long afterward stated her desire to become a missionary to China. Francesca, Evangeline’s younger sister, loved music, art and reading. She was a skilled debater as well as a trained nurse with a sensitive and compassionate nature.

Eva French arrived in Shansi, China, in 1893, seven years before the Boxer uprising and eight years before the arrival of Mildred Cable. When Mildred arrived in China Eva, already an experienced missionary, was assigned as her supervisor. Francesca, who had remained in England to care for her mother, joined them in 1908. Together the three women missionaries, who travelled, wrote and laboured together for the rest of their lives, became affectionately known as ‘The Trio’.

Initially Eva and Mildred co-laboured among the local women, who could not read or write and rarely left their homes, in the city of Houzhou. Convinced that the key to advancing the gospel in China lay with the education of women and girls, in 1904 they opened a girl’s school. Mildred designed the curriculum, which included literacy, science and Chinese classics and discouraged the Chinese traditions of foot binding of girls and female infanticide. After Francesca’s arrival in 1908 the Trio held a six day mission which was attended by 500 women from the surrounding region, a noteworthy accomplishment in a culture where women were traditionally confined to their homes.

The school was a resounding success, producing Bible women and teachers and teaching an estimated 1,000 girls over a period of twenty years. Many of the graduates became teachers, educating thousands more. Over that period the school gained a reputation for being a major center for Christian women’s work. As a result of the Trio’s work in Huozhou many Christian women emerged as leaders in the Chinese church and Chinese education advanced significantly. However, when the provincial governor decided to open 70 new girls’ schools in 1923, he seconded teachers and students from the school to staff them, leaving the mission school without staff or students.

Sensing God wanted to move them into new areas of ministry, the three women decided to abandon routine daily life at the mission station to reach out to more remote and unevangelised areas of China. In June 1923 the trio set out along the Silk Road for the province of Gansu. After nine months and 800 miles travel, they settled for a while in the town of Zhangye, where there was a small church and a very welcoming pastor. They conducted a Bible school, teaching both men and women, and soon 50 new disciples had been baptised, doubling the size of the congregation. Many of these were trained by the three women as evangelists, so they themselves could move on to more remote areas along the Silk Road.

They moved on to Jiuquan, the last town before the Gobi Desert began and a hub for travelers and traders. They continued to disciple the small company of believers they had brought from Zhangye, sending them out in the afternoons to preach in the streets and visit women in their homes. Using Jiuquan as their base the trio moved out further along the Silk Road, sharing the gospel with travelers on the road and in the many inns along the way, stopping often in remote places to reach more people. They stayed for a while in Dunhuang, a crossroads town between India, China and Tibet where they were able to share their message with Muslims as well.

Each of the three women was known to be independent and strong-minded. Eva French was criticized for giving communion to her Chinese congregation on Christmas Eve 1924, as giving communion was considered to be solely a male responsibility. Unmoved by the criticism, Mildred Cable also celebrated communion the following Easter.

After spending winter teaching the Bible in Jiuquan, they once again set out, north west across the Gobi Desert this time. Following the advice of other travelers they had a wooden travelling cart made with wheels eight feet high. They sheltered in smoke-filled primitive inns where clean water was scarce, and travelled at night when the weather was cooler. Their habit was to gather with the many travelers resting around the campfires in the courtyards of the inns, sharing food and talking. They traversed dangerous and uneven mountain roads, singing songs and preaching at every opportunity. They carried on through sand storms, bitter cold and searing heat, and once became stuck in three feet of mud. The threat of bandits was a constant danger.

Once, coming upon a pilgrim who had been walking for six months prostrating himself on the ground every few steps, they showed him a copy of John’s gospel. On reading the words “In the beginning was the Word, and the Word was with God, and the Word was God” he asked “Who is this about?” “His name is Jesus,” they replied. “Tell me how to believe in Him.” At another point they were greeted by two male missionaries and granted an audience with the governor of the province. They then continued their ministry for 700 miles until they reached the Russian border, after which they returned to London for furlough.

Returning to China in 1928 they set off again along the Silk Road, again spending their days and nights traversing the exotic trade routes and remote towns and villages in their quest to bring the gospel to the Chinese people.  In later years Mildred Cable would write : “From Etzingol to Turpan, from Spring of Wine to Chuguchak, we … spent long years in following trade-routes, tracing faint caravan tracks, searching out innumerable by-paths and exploring the most hidden oases. … Five times we traversed the whole length of the desert, and in the process we had become part of its life.” (There is not space here to describe in more detail the amazing travels of these three adventurous and faith-filled women, but a small list of resources for further reading is provided at the end of this article for anyone interested in further reading.)

By 1932 the political situation in China was becoming increasingly unstable. The Trio realised war was inevitable and trained local disciples to take over their work. Mildred had also been seriously injured by a kick from a donkey.

They left for Britain, returning in 1935 when they found much of the countryside had been destroyed by war and typhoid had wiped out great numbers of the population. As determined as ever, they baptised new believers, and set up children’s classes, Bible studies and literacy classes. However, in August 1936 the Communist government ordered the departure of all foreigners from China, and, after thirty six years in China, the Trio made their way back to England for the final time.

By the time the Trio left China, they had traveled the Silk Road five times, and were widely known among the Muslim population along the road as “the Teachers of Righteousness.” They had made Jesus known to both Chinese and Muslim traders along the main trade routes, and the literature they distributed in several languages was carried throughout Asia.

In her later years Mildred helped establish the Bible Society’s women support groups and worked for the Women’s Voluntary Service during the Second World War. She lectured to the Royal Geographical Society and was invited to tea with Queen Elizabeth. Together with Francesca she wrote a number of books. She died in 1952 at age 74. Eva settled in Hampstead to care for the little deaf mute girl the Trio had adopted in China, whom they affectionately called Topsy. Eva lived to the age of ninety, and during her final days Francesca slept on the floor beside her to care for her. When she was scolded for sleeping on the floor, Francesca replied, “I’ve been sleeping on floors all my life.” She outlived her older sister by only three weeks.

The names of Mildred Cable, and Evangeline and Francesca French, are little known or remembered. They are not famous and celebrated names like William Carey, Hudson Taylor or David Livingstone. Yet, in my estimation, the hardships experienced, exploits undertaken and courage demonstrated by this amazing trio of women are just as worthy of note as those of many of the male heroes of the faith we hold in such high esteem. Only God truly knows the extent to which the seeds these women sowed have helped reap the Chinese church of today, which in turn sends missionaries all over the world.

In every sense of the word these women were apostles, as well as evangelists of extraordinary commitment and valour. For me, they are among the first saints I want to have a long conversation with when I step from this life into the next.

Mildred, Eva and Francesca, we celebrate your faithfulness, your courage and your legacy. Thankyou also for providing living proof that, where women are concerned, the preaching of the gospel knows no barriers.

Sources Referenced for this article:

Not Less Than Everything  Valerie Griffiths