The Gentle Gale of God

As we enter 2016 there remains no less need or desire for discovering God in new ways. The following post is from the archives of Desert Days at Wellspring of Life; first posted there in May 2011 at the end of my second breast cancer journey and treatment year. May the Lord reveal Himself to us in this new year with fresh awakening and a deepened knowledge of Who He is in the midst of our present and daily sands of time. ~ Nancy 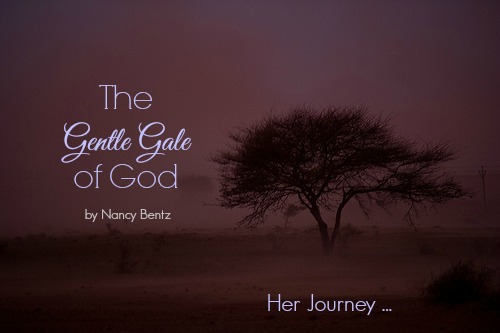 There’s a commercial that’s been running on television the past six weeks or so. The few times I’ve happened to catch it I’ve thought to myself, “There’s a blog post in there.”

The setting is the desert with sand as far as you can see. In one quick scene there are two four-drawer file cabinets sitting side by side, plunked in the dirt. In another few-seconds scene you catch a glimpse of a big desk with a person seated behind it. They are presumably conducting business in the middle of the swirling dirt stirred up by all the commotion going on around them in this ‘out of office’ experience.

Can you relate to the sense of disorder and confusion this scene evokes? Are you picking grit out of your teeth? Do your eyes ache from squinting through dust-filmed eyeglasses, making clear vision nearly impossible? Does the wind shift at whim and blow choking dust up your nose? If so, there is a reason…

Because some facets of who God is can only be discovered in the desert.

We enjoy His wonderfulness in our mountaintop experiences. We receive His refreshing rest by cool streams. His companionship is precious during our valley passages. But the desert provides a backdrop second to none for a revelation of God in ways we have not known Him before.

The desert daily, if not hourly, reminds us that our dependence is and must be on God. However, we choose how we’ll go through the desert.

Considering that God’s nature is the reverse of this gritty TV commercial, what facets of His character does He want to develop in and through us in the middle of this desert sandstorm?

*God is a not a God of disorder or confusion, but of peace. Obviously, the swirling dust and commotion that has everything in a tizzy is not originating with Him. That leaves three options: it’s from others without, including the enemy; it’s from within; or both. Running an internal ‘wellspring scan’ might be quite revealing. That’s a good place to start before looking outward for reasons behind such disturbance in the atmosphere and one’s circumstances. Sometimes, “I’ve seen the enemy and the enemy is me,” has more validity than we care to admit.

*As for sand-blasted teeth, Christ took it in the teeth more than a few times. Yet He had no need to defend himself. He knew who He was, is, and ever will be. And we are His offspring. To the degree that we struggle with knowing who we are in Christ our counter-measures of defense will be creative and prolific.

*The only one who sees things as they are is God himself. The only way we can view things as they are is if He becomes our vision. Be Thou my Vision is more than just a beloved old hymn. It is a necessity if we’re to closely follow His footsteps in the ever-shifting path through the sand. We must trade in our grimy, pitted eyeglasses of earthly solutions and lean in to Him as He leads, for He alone is mysteriously capable of making a way in the wilderness where map and compass have no bearing.

*The remedy for clogged up nostrils is not smelling salts. No, it’s fragrance of another reviving kind. It is the heady scent of God himself; the perfume of the rose of Sharon and the lily of the valleys. Cultivating a habit of lingering in His presence cannot help but bathe us in His fragrance, letting others know we have been with Jesus.

By no means is this an exhaustive list of who God is in the desert. It’s merely the tip of the sand dune. But I pray it will give you a starter list to consider that in discovering God in new ways, He enlarges your capacity to ‘do business in the desert’ in a spirit opposite than what is swirling around or inside you.

Whether you labor in a literal office environment, work at home, or toil in the field in any given vocation, there are desert gifts waiting to be unpacked – attributes of God you would not otherwise come to know, embrace, and embody. Where do you start?

Don’t look for the gifts; look for God.

He will come and bring His gifts with Him. Sometimes in ways we may not expect, but He comes and shows Himself as we look for Him.

Praying for a fresh wind of the Spirit and the gentle gale of God over your heart and mine in 2016,