A Dream in the Night

Ishshah’s Story will celebrate its 2nd birthday in just a few weeks. Reaching back to the Archives, the following post is the first one I wrote for our fledgling blog two years ago. Given recent messages the Lord has released about spiritual abuse and the enemy’s operation through hidden darkness, this archives re-post is timely. May we be reminded again that the Lord has often used throughout history a dream in the night to warn, call attention to, deliver a message or give clear instruction for a way to safety. ~ In His care, Nancy 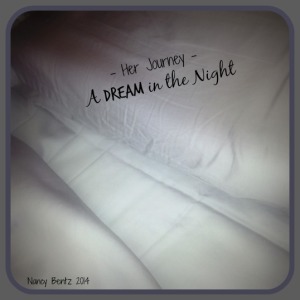 There is an old saying, “The journey of a thousand miles begins with a single step.”[1] I prefer though the more accurate translation from the original Chinese…

“The journey of a thousand miles begins beneath one’s feet.”

In my case, it began beneath my head while I lay dreaming in the night. A sweet dream it wasn’t.

It came in the early years of our marriage. Our three little children were stair-step ages all two years apart, and my husband and I were involved in the local church body we had started attending as newlyweds. A good mix of older folks down to the youngest baby, it was a community swirling with the activity of the singles, youth, and a generous amount of young married couples and growing families with children.

Leadership ages ranged from younger worship leaders to the middle-aged almost or completely empty-nesters on up to the pastor’s elder father. If one were peering in the windows, it would look like a big, happy family with all the generations well-represented. But appearances can be deceiving…

Six years and my nightmare dream later, my husband and I counted up no less than fourteen of those marriages that had been affected either by adultery, divorce or both. In a local church numbering no more than about 300 people, you do the math. Marriages were under attack.

It was too many to think it was simply random bad luck of couples not meant for each other. What became apparent to my husband and me was that somewhere in the church’s several decades of existence, the door had been left wide open for the enemy to exploit this particular area of body life.

Long story short, there were a few gutsy enough – my young husband included – to go to the pastor and elders about this concerning trend. Scriptural warning was raised and the alarm sounded. The response from the leadership was anything but encouraging. Met with downplay and defensiveness, the ones bringing the word of admonition were made to feel they were the problem. The elephant in the sanctuary reigned sacred.

Time passed. Then one October afternoon five years into our marriage, I was stirring a pot of soup when a grave phone call came telling me that the 31-year old wife of one of the church leaders had died unexpectedly during a routine surgical procedure – leaving her widowed husband with two young children and a toddler. Her untimely death impacted and unsettled our church. That same month I learned I was expecting our third child.

The months passed and our healthy baby girl was delivered. Then, unbidden, the dream came…

The scene was the basement fellowship hall of the dated neighborhood building the church had purchased a few years earlier. With cement grey walls and painted concrete floor, surrounded by lots of rooms for Sunday School classes and church offices, the big open room was constantly utilized. Body life took place here with everything from children’s church and youth group to annual business meetings, potlucks, wedding and baby showers.

I was standing alone in that basement fellowship hall, with the Lord next to me saying, “I want to show you what happens to the women in this church.”

As I looked across the room at the doorway that housed the staircase and landing, I saw gurney after gurney being rolled into the room and lined up in a row. The forms of dead bodies covered with white sheets sent a chill through me.

But it was when I saw who the deceased were that a warning fear gripped me. There was a family in the church, a good and solid couple with a large number of children…and there before me lay first the mother, then every one of the daughters. No female of that family had any life left in her.

By the Spirit, I understood they were representative of the spirit of death the enemy was unleashing upon the females within the church. The very ones designed to carry life to term, give birth, nurture, teach and equip the little ones, and raise up to maturity so the cycle could continue.

I woke up from that dream with a dread certainty that if we remained there, death was going to happen to me; I would not escape it. And we had two young daughters, also. I sensed not a physical death, but a dying of spirit and snuffing out of life nonetheless.

Celebrating thirty-eight years[2] of marriage in September, my husband and I are now thirty-plus years of life beyond that local church we had settled into just three weeks after our wedding. (And yes, we left).

The narrative of our story, indeed my story, has threads that trace all the way back to those first six years. Today, my husband and I would tell you that we can now look back and from our hearts, say:

“And you, you intended evil against me, but God meant it for good, in order to make it as it is this day, to keep a great many people alive. And now do not fear; I will nourish you and your little ones. And he comforted them, and spoke to their hearts.” (Genesis 50:20-21 LITV – Joseph to his elder brothers who sold him into slavery).

My journey of a thousand miles began long ago. Full of twists and turns, valleys and dark nights, merciful light and certain grace – it’s a story of God’s redeeming love.

It took me some time to admit that the Word of the Lord stands firm and true. And that I don’t receive ‘special exception’ status just because I bear the name Christian.

I find it to be just like the Lord though, that with all this talk of death (even His personal visitation in my dream to ensure I heard it straight from Him), to include in my journey dying anyway. Dying to self so I can walk increasingly in His resurrection life.

Today, you may be that young bride or the wife and mother with a busy household. Or, against your deepest desire, you may find yourself still single or single once again through the death of your marriage. Perhaps a grey-haired grandmother whose heart holds dreams not yet fulfilled. Maybe you’re the woman sitting upright in the pew, while inwardly the white sheet of death is creeping dangerously closer to covering your soul.

Where do you find yourself standing today? The next step is right where you are, looking at what is beneath your feet.

Praying for you Romans 16:17-19 with the benediction of wonderful verse 20:

“The God of peace will soon crush Satan under your feet.
The grace of our Lord Jesus be with you.”

[1]Attributed to Chinese philosopher Lao-tzu some 500+ years before Christ
[2]Soon to celebrate our 40th, all praise to the Lord!