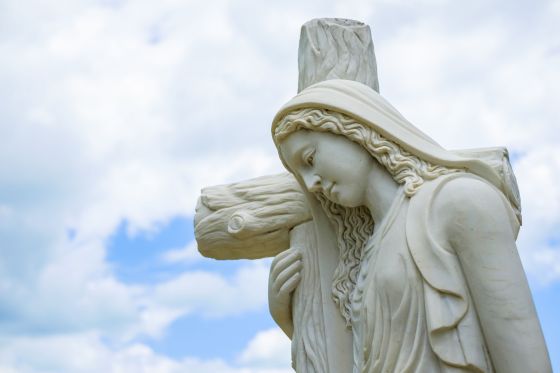 Who was Mary Magdalene? How much of what we think we know about her is myth, innuendo, or fabrication? Can we clear away the false from the true, remove the layers of unsubstantiated church tradition, Hollywood fiction, rock musicals and imaginings of modern novelists to discover the real Mary Magdalene, friend and disciple of Christ and eye witness to both His crucifixion and resurrection?

Mentioned by name in each of the gospels, it is believed Mary was called the Magdalene as a reference to her home town, Magdala, on the shores of Lake Galilee. Many scholars believe she was unmarried, as married women were usually known as ‘wife of’, rather than by their birthplace.

Though she is most often depicted in art and film as a young woman, we have no indication in scripture of Mary’s actual age and no reason to assume she was not in the same age group as Jesus’ mother and some of the other older women who sometimes travelled with Him.

Historically, Mary of Magdala has frequently been confused with several other women in the gospels also named Mary. This confusion between the ‘Marys’ has been instrumental in creating the inaccurate picture of Mary Magdalene still held by many. Mary, or the Hebrew Miriam, was a common Jewish name in Jesus’ time, and other Mary’s mentioned by the gospel writers include the Mary who was Jesus mother, Mary of Bethany, Mary the wife of Clopas, and Mary the mother of James and Joses.

We do know Mary was just one of a number of women Jesus had healed, some of whom travelled with Him and supported Him financially (Luke 8:1-3).  Mary’s hometown of Magdala was a thriving centre for the sale of fish and it’s not beyond reasonable possibility she may have been an independently wealthy woman with a commercial background in this trade.

In some Christian traditions Mary’s greatest claim to fame has been that of a repentant prostitute who after conversion became a symbol of chastity and virtue. However, there is nowhere in the Gospels or other New Testament writings that state or even imply Mary was ever a prostitute. Luke tells us Jesus delivered Mary of seven demons. While we may wonder about the nature of her oppression what is clear is that she was severely unwell and Jesus healed her. There is nothing in scripture, however, to suggest her oppressive illness was in any way sexually related.

The picture the gospels paint of Mary is one of faithfulness, strength, and devotion to Christ even at personal risk. Contrary to the traditional but false stereotype of a repentant prostitute, Mary should rightly be remembered as one of the ‘many women’ who remained at the crucifixion after the majority of Jesus’ male disciples had fled, and the first person to whom Jesus chose to reveal Himself after His resurrection (Matt. 27:55-56; Jn. 19:15; Mark 16:9).

Mary of Magdala was also entrusted by Jesus with conveying the momentous news of His resurrection to His disciples, prompting Thomas Aquinas, an early church father, to call her an ‘apostle to the apostles’ (Jn. 20:17).

For the first six hundred years of Christianity Mary was known and respected as a prominent disciple and close, trusted friend of Jesus. As the young church increasingly succumbed to the influence of the Roman world around it, hierarchical male dominance, once rejected by Jesus, re-emerged, and women were relegated to subservient roles under male authority. Within this climate, Pope Gregory 1 (c540-604) gave a series of sermons in the year 591 that dramatically altered the image of Mary of Magdala held by the Christian church.

In his sermons, distributed throughout the then Christian world, Pope Gregory 1 incorrectly aligned Mary with the unnamed ‘sinner woman’ of Luke 7:36-48 who poured her alabaster jar of ointment over Jesus. With no Biblical basis he furthermore identified Mary’s seven demons with seven deadly sins: Lust, Greed, Gluttony, Sloth, Wrath, Envy, and Pride.

“She who Luke calls the sinful woman, we believe to be the Mary from whom seven devils were ejected. And what did these seven devils signify if not all the vices? ….It is clear brothers that the woman previously used the unguent to perfume her flesh in forbidden acts. What she therefore displayed more scandalously she was now offering to God ….She turned the mass of her crimes to virtues in order to serve God entirely in penance.” (Homily XXXIII)

The false teaching of Pope Gregory 1 redefined Mary’s story and perpetuated myths about her that have passed down through the Middle Ages, the Renaissance, the Reformation and into our own modern Church era¹. The Mary Magdalene of the gospels and early church was lost somewhere in history and kept there by a male-dominated church for which the idea of a strong, female role model with leadership skills equal in status to the male apostles was undesirable².

The true Mary of Magdala was further obscured through paintings and artwork that depicted her as a repentant sexually fallen woman, cementing her newly-created reputation as a former prostitute, despite the fact that scripture alludes to no such history for Mary. (This is the reason why you will sometimes see Renaissance paintings of Mary dressed in red – traditionally the colour symbolising harlotry).

Sadly, organized Christianity and Christians in general have been complicit in perpetuating the myths about Mary and continue to do so. Even in the 21st century contemporary Christian films are still being produced depicting Mary of Magdala as a woman who had made a living as a prostitute.

Throughout the centuries Mary Magdalene has been persistently misrepresented by church leaders and in popular legend as a notorious former prostitute turned repentant saintly mother figure. The Bible depicts her as neither of these, but as an ordinary Jewish woman healed from serious ailments by Jesus, who became His faithful disciple.

Mary Magdalene is one of us, a woman doing her best to follow Christ in a world that is opposed to Him. She is neither to be revered or objectified to serve the purposes of fallen men; she should, however, be respected as a foundational member of the Body of Christ, honoured as the first person sent by Christ to preach the gospel, and celebrated as yet another life whose course was eternally impacted by our Saviour Jesus Christ.

Paradoxically, Mary’s story historically parallels the story of womankind since The Fall destroyed the perfect harmony and equality between the original man and woman.   The Fall resulted in the default setting of equal partnership between the genders becoming dysfunctional. Sadly, for many men, including in the Christian church, it is still easier to view women as sexual temptresses than deal with their own gender bias.

So many false images of Mary Magdalene have been conveyed and insinuated through sermons, artwork, film, novels and misinformation, I believe it’s time for all sincere Christ-followers to start rejecting her misrepresentation and celebrating Mary for the woman the Bible says she was. It’s time for truth honouring Christians to reclaim the Magdalene.

Mary of Magdala, the woman who walked with Christ alongside His male disciples, who stood by faithfully at His crucifixion, the first person He chose to meet after His resurrection, His apostle to the apostles, has been stolen from us. Those of us who have knowledge of the truth about Mary can take an important role in correcting that which is false by spreading the truth about her. We can start by challenging the myths and false assumptions that surround her whenever we hear them repeated.

Will you help reclaim the Magdalene?

²It should be noted that The Eastern Orthodox church took a different view of Mary Magdalene and have always held her to be a different person to the woman who was ‘a sinner’ in Luke 7.

³It was not until 1969 that the Catholic Church declared Pope Gregory was mistaken and that Mary Magdalene was not the penitent woman in Luke 7:36-50. Furthermore, the Church clarified that Mary of Bethany and Mary Magdalene were two different people.

5 Things You Should Know About Mary Magdalene, Junia Project

What The Bible Says About Mary Magdalene, New Life

← Martha Martha
Finding Photini–Light On The Woman at the Well →