Finding Photini–Light On The Woman at the Well

We are pleased to introduce a new guest author, Paule Patterson .  Paule is the Student Ministries Pastor at Real Life on the Palouse in Moscow, Idaho, USA, where he frequently preaches. He has three children and has been married to his best friend for over 11 years. He is passionate about guiding people into a better perspective of Scripture and of themselves. He attempts to ask questions that are often glossed over and to challenge the most basic of assumptions, looking for the shades of grey and color beyond the black and whites.  Check out his website at  validambiguity.com 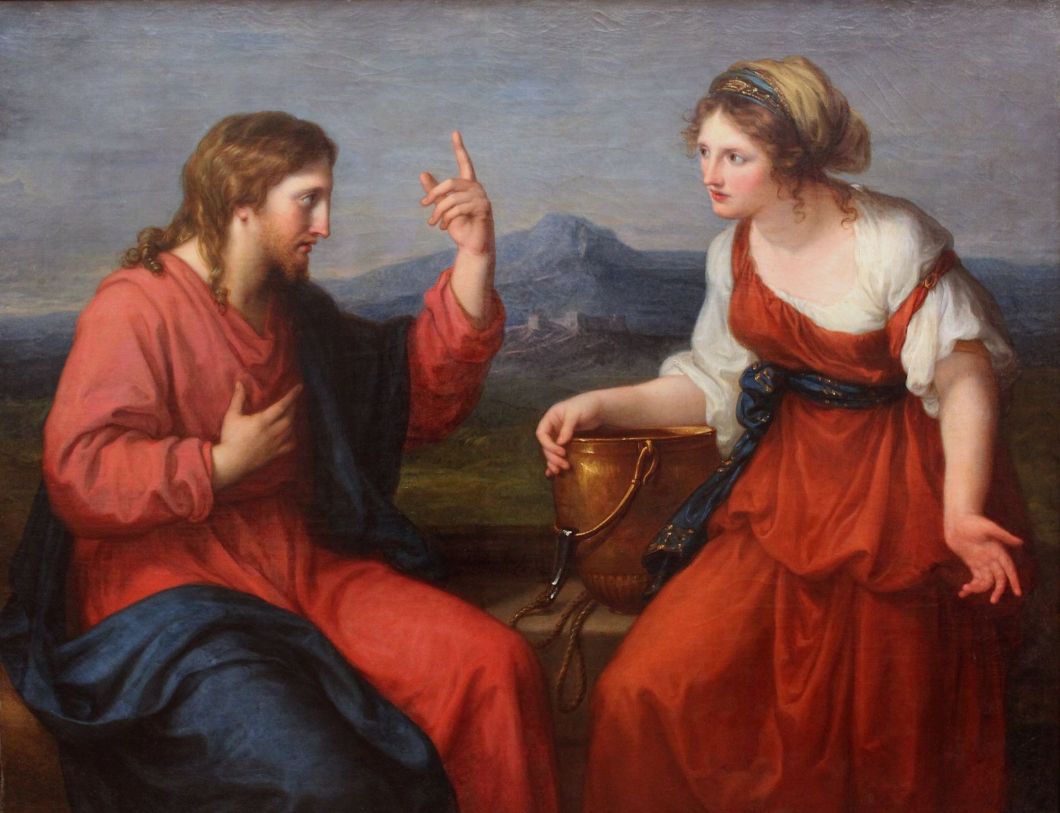 The Samaritan woman at the well in John 4 is perhaps one of the church’s most beloved stories. Countless sermons and devotions have centered around it. Yet it still exudes an air of peculiarity, as if we’re missing a part of the story. The type-face on our Bible pages whisper of nuance and mystique. It hints that there just might be more to the story than what is printed on the page before us, if we could just find a thread to pull on. I would like to offer you two such threads. The first thread is the identity of the woman. The second thread is the reason Jesus picks this town.

Concerning her identity, it has often been assumed that she led a promiscuous life. This is presumed based on her five marriages, her living with a man not her husband, and her coming to the well alone mid-day. To begin, it’s important to remember that women in that time and culture did not have the ability to divorce except in cases of abuse. It is also doubtful that she would have had so many adulterous relationships in the town of Sychar, which would have only had one to two hundred residences. Don’t forget that adultery was considered criminal and worthy of capital punishment. What is more likely is that she either was shut out because her husband grew tired of her, was widowed, or was in an obviously abusive relationship. In all probability, it was a combination of some of these since it is unlikely that all five marriages ended the same way.

So what of the man she was living with? Three possibilities. First, she could have been taken in by another family. The head of this household would have been the patriarch and so she would live under his care. Second, she could have been in a Levirate marriage, in which a man dies without an heir so his brother takes his widowed wife and bears a child in his name (Deuteronomy 25:5-6). In these cases, the widow would not be necessarily considered the brother’s wife, at least until a child was born. A third possibility is that she could have been in a form of common law marriage. If a woman no longer had a male representative who could enter a legally binding contract and pay the legal transactions (called a ketubbah), then the simplest way to get married was an arrangement where the two lived together for about two years, after which they were legally considered married. This was considered completely legitimate and ethical. It allowed those without a family or wealth to enter into marriage.

“Ok, but why is she at the well all alone during mid-day?” Because she needed water. While it is true that most women go to the well in the morning, it is not uncommon to find women there during all parts of the day. What is more, we do not know if John is using the Jewish way of keeping time (which would have been twelve o’clock) or the Roman way (which would have been six o’clock).  Many scholars prefer the latter since John was written much later than the other Gospels and to an audience who would have operated on the Roman clock.

Once we allow this assumption to fall away, what we find instead is a woman of sorrow and loss. She was a woman full of hurts and broken relationships. By the time John 4 happens, she was past the age of being a suitable bride. So, when Jesus, a 30-something year old Jewish man began a dialogue with her, she was taken aback. To approach a woman in public, even in the most formal of settings, was considered scandalous, even promiscuous. John even highlights the awkward nature of this by alluding to every other story of a man and a woman meeting at a well in the Old Testament where each one of those stories ends with a marriage (Isaac and Rachel, Jacob and Rebekah, and Moses and Zipporah). This is why the Apostles were jaw-dropped and speechless when they returned. It’s as if Jesus was performing the modern equivalent of asking her on a date.

Of course, he wasn’t. What he was doing was approaching a woman who felt unapproachable, noticing a woman who felt invisible, and loving a woman who felt insignificant. Through this carefully constructed moment and his calculated statements, Jesus lured her into beauty and fidelity. The Messiah had chosen her. He went looking for her and had found her. Rather than being a deep well on the outskirts of a city, she would become the gushing water in the heart of her village. Later, the Eastern Orthodox Church would name her St. Photini (the light). This story is about empowering those held in darkness to shine brightly. It’s about empowering the victim, restoring the forgotten, and giving the voiceless back their voice. This is what Jesus does.

But Jesus isn’t done yet. There is still more to what Jesus is doing. We read in John 4:4 that Jesus “had to pass through Samaria.” Was it just for this woman? If so, it would have been enough. Thus is the relentless love of our Lord. Yet, it is this same relentless love that drove Jesus to not just this woman but also to the Samaritans. Samaria was a people long divorced by the people of Israel. They were considered half-breeds and religious heretics. Jews, refusing to even pass through their land, would skip the quicker route through Samaria to Galilee and would walk around Samaria.

It was not always this way. Samaria was once just as Jewish as Judah and Galilee. It was a part of the kingdom of David and they were considered brothers. This changed when Rehoboam oppressed his people and the northern kingdom broke off. They then attempted to build their own religious system since Jerusalem housed the temple in the south. Unfortunately, they immediately compromised their faith by blending it with pagan elements. Eventually, after failing to heed God’s many pleas for them to come back, they were conquered and all but wiped out by the Assyrians. What was left in the void of those who were either killed or kidnapped were the few poor in the hill country. Into that void, Assyria would traffic other people groups to occupy it. Over the years, these two groups would intermarry and their bloodline would merge. The Samaritans would eventually attempt to restore their “Jewish” faith by having their own temple, priesthood, and even Torah. These, of course, were rejected by the Jews as blasphemous knock-offs and would only further the hate between the two groups,

So when Jesus “had to pass through Samaria,” he was attempting to restore a bond with an ethnic group long cast off and rejected. And he was using this woman to start the whole process. Later, his apostles would pick up what Jesus started and would preach “the gospel to many villages of the Samaritans” (Acts 8:25). This is why the Eastern Orthodox Church will refer to the Samaritan woman as the first apostle since it was she that first brought the Gospel to others. Jesus is not only about restoring the victim but also healing age-old rifts between peoples. The work of Jesus is to both restore the person and the relationships between persons. May this also be our work. May we restore the forgotten, the outcast, the oppressed, and the marginalized. May we heal the rifts between ethnics, genders, classes, and persons for “blessed are the peacemakers, for they shall be called children of God” (Matthew 5:9).